The Gallery is now using the second floor exhibition hall, which we have just recently named PEDESTAL, for presentation of artworks from the Slovak Mining Museum’s collections. This enables us to exhibit publically certain collection items usually concealed in the Museum’s depositories. The presentations will be designed to follow a certain topic or motif, with the goal of highlighting the multi-layered structure of the collections using a variety of approaches to exhibition design.

The current exhibition, Putti: Emblems of Love and Glory, focuses on baroque sculptures of male children – the so-called putti (from Latin putus = boy). These figures of half-naked, chubby, and mostly winged angels have been present in the world of art since ancient times. In the antique era, the putto was part of mythological imagery, representing Eros (called Amor or Cupid in ancient Rome) – the god of love, sensual desire, and fertility. He is known for holding a bow and arrow. Eros, allegedly, shot arrows into people, thus making them fall in love. In antique art, Eros as a winged man was often found in artworks together with his mother, Aphrodite, or his love, Psyche. Equally well-known are the images of Eros, represented by toddler angels, at bacchanalia, ecstatic celebrations of the god Dionysus.

With the spread of Christianity, ancient mythological images were gradually abandoned, and the putti fell into oblivion. Beginning in the Renaissance, with its return to antique times, the putti re-appeared in art. However, later, during the Baroque period, the function of putti changed as a result of Counter-Reformation efforts; the traditionally secular characters became sacred ones, celebrating God. And so, putti, once emblems of love and sensual desire, became angel figures and, as supporting characters, popular parts of religious scenes.

The exhibition in the Jozef Kollár Gallery addresses the dichotomic nature and ambivalence of the putto as a character and motif throughout art history, moving along the line between secular and sacred. In the past, the Late Baroque putti on exhibit here were seen in temples or as part of sacral sculptures. In the Jozef Kollár Gallery exhibition, these angel figures are freed from their former religious-ideological function. In addition, these formerly only supplementary art components are assigned the main role in the “show”, becoming the centre of attention. Visitors can thoroughly scrutinise the putti, not missing a detail: their mischievous gestures, curly hair, pinkish cheeks, or full bellies. The exhibition also has a central composition, with golden fabric as both the dominant and unifying element. Individual layers, gaps, and folds of the shining fabric contribute to the scene’s dramatization but also add to the softness and plasticity of the figures. The putti thus appear very natural as a group of children frozen in an actual moment, communicating with each other, fooling around or just quietly resting in a gold-flooded landscape. 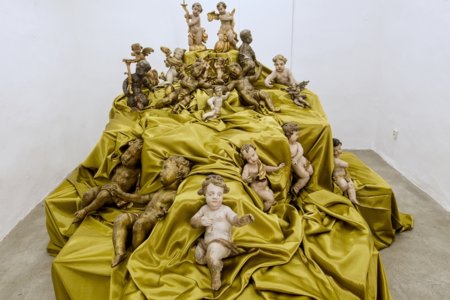 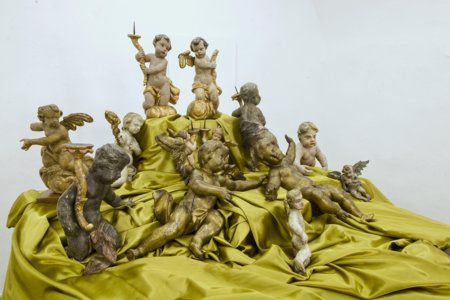 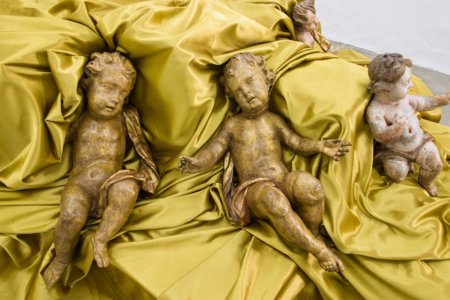 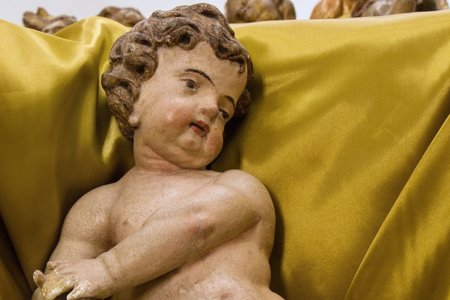 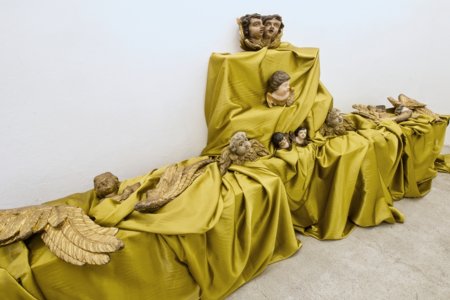 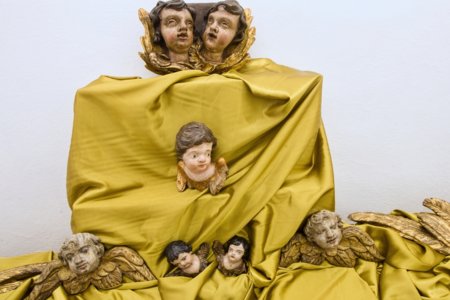 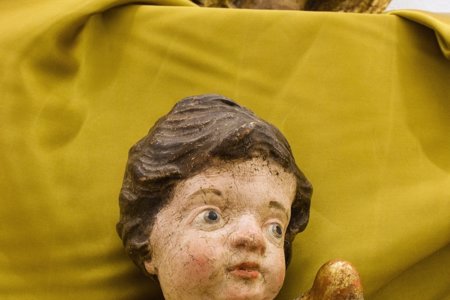 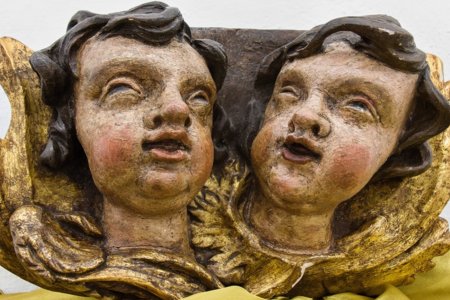