Opening: 18. 11. 2022, 18.00
Duration: 19. 11. 2022 – 30. 4. 2023
Venue: START UP, Jozef Kollár Gallery, Banská Štiavnica
Organizer: Slovak Mining Museum, Banská Štiavnica
Partners: Banská Bystrica Self-Governing Region, Chateau Topoľčianky, Miners‘ singing group Štiavničan
----------------------------------------------------
Johana Merta works comprehensively with the START UP space and with the structures of the museum. During her stay, she has got acquainted with the museum's collection and its staff. Merta benefited from the experience of the museum staff because, as she admits: „people are the key to the landscape". She works with typical mining objects as symbols of human existence. If each lamp represented a miner and each stone his/their efforts, then the artist encourages us to evaluate their commitment to life. It should be mentioned that the miners became free citizens thanks to their social reputation, and their exhausting deep mining.

The final artist's installation is a combination of exhibits borrowed from the museum's deposits with the artist's findings, which she collected during her stay in Banská Štiavnica and is supplemented by objects from her earlier and current work. The artist considers displaying local poverty next to the local waste to be confrontational, but both are an important part of our human story. Every moment, when we are trying to gain insight into something, can be a good time for a recapitulation and searching for inner motivations.

Surface Mining is ecologically and sociologically thinking project. The artist understands it as a metaphor for global contemporary life on our vulnerable mentality and a formation of self-value. The artist's critical and poetic thinking is visually processed here in combinations of individual subjects, for example – porcelain stone as a reference to fragility of life. With collages of women/mountains, she portrays the exploitation of landscapes as entities. In current permanent exhibitions of the museum, it is impossible to find any mention of women miners, this chapter of history is presented only during guided tour, but at least we can be thankful for that… An image was always liable to the past and equality of interpretation.

The collages were created during her first visit to Banská Štiavnica in 2011, when she was studying in the studio of local artist Svätopluk Mikyta. At that time, she was working with the theme of stone, as a placeholder for the uniqueness and value of each ordinary piece. With this exhibition, she returns to earlier ideas and moves them further in relation to superficiality, to the problem of form and passing through it. The superficiality is a trap, which according to the artist, largely determines the degree of alienation in our relationships. The phenomenon of the superficiality is represented by the tinsel of the entire space and defined by a quote: „…and I'm not even talking about, that I wouldn't even be able to know the value of a finding, because I consider everything present to be a waste.”

The social aspect of the exhibition has the most important role here. Merta tries to establish relationships through which she encourages us to make a conversation as the most valuable human creative activity. Every observer has a privilege to draw from his/her life experience, and the artist purposely does not name individual parts of the installation to enable free considerations. Merta realizes the need to have a conversation and she considers it, as the result of her work. We all know, how important is to share and communicate.

The project Surface Mining examines the dimension of cooperation and the need to secure the social environment. The “Golden Chapel” is possible to perceive as a purely aestheticized environment, but the golden foil itself carries another meaning, which touches on the relationship between the artist and the gallery operation and thereby ensuring existence. Foil is a thermal insulation material used to maintain human body temperature and prevent its loss; it is used in the provision of First Aid by emergency medical services. Merta perceives the reciprocal relationship between the gallery and the artist as a necessity for the functioning of the art operation, thus indicating the pressure in which the cultural sector has been for several years.

Johana Merta studied exhibition installation, performance, intermedia, drawing and graphics, graduating in 2017. It´s natural for her to work with this variety, and to use it for experimentation, which is an important element of her work. Merta comes from Brno, lives in Skutč. She is a mother of three children, a honey buzzard, and a singer. 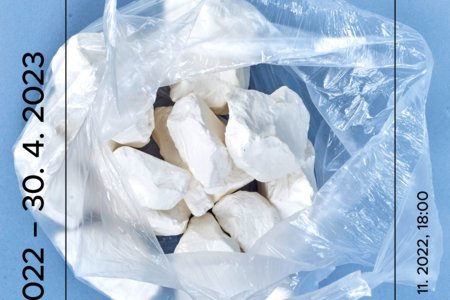