Under the Arches, Jozef Kollár Gallery

The exhibition of the intermedia artist Eva Ďurovec, entitled The War Journal, is not only a reaction to the current war in Ukraine. In her work, the artist also reflects on migration policy and militarisation, as well as on seemingly marginal topics such as land reform in Ukraine, the use of arable land in Slovakia and the suppression of the ecological threat, among others. The artist’s creative process is radically reduced to autodidactic study, conversations with her partner and friends, and intensive news-watching in three countries: Germany, where she currently lives, Slovakia, and the Czech Republic, where she used to live.

The exhibition consists of three parts: a set of hangings, covered with hand-written texts or embroidered kitchen towels, located in the centre of the room; then a text, cut into the fabric, which, together with sand barricades, is situated at the back of the room; and excerpts from the artist’s diaries of several years ago, which are available for visitors to see as they enter the exhibition.

Micro-essays are written on a typical artifact of women's work - a kitchen towel, whose geometric grid holds, in black marker, text written between 24 February and 6 March 2022, and embroideries of three animals recently extinct due to climate change: The white ringtail possum couldn't survive for more than 5 hours in temperatures above 30° in the disappearing habitat of Australia's cooler forests; and the Bramble Cay Melomys – a rat, couldn't adapt to the 10 cm rise in sea level of the Great Barrier Reef measured between 1993 and 2010, nor to the frequent cyclones leading to repeated flooding of the Bramble Cay coral reef. The life of the Costa Rican Golden toad depended on the levels of small reservoirs. If there was too much water its eggs floated away; if there was too little water, the eggs dried up. An embroidery of the Indus River basin on the border of Pakistan and India shows an area of Mangrove forests forming a natural barrier against flooding that not only reduces soil erosion but stores five times more greenhouse gas than other trees, and which will disappear by 2050, due to climate change. Shutting down the extraction machines is postponed indefinitely.

A camouflage net made of the word "Pseudo-environment" continues into a text in Cyrillic: Иван, что тебя скажет твоя мама!? (graffiti message to the occupying Warsaw troops in Prague, "Ivan, what will your mother say to you?" from 1968) and another one by the long-time employee of the main pro-Russian television station, Channel One, Marina Ovsyannikova, who held up a banner during a live TV broadcast stating: “NO WAR Остановите войну не верьте пропаганде здесь вам врут...” (NO WAR. Stop the war. Do not believe the propaganda. They are lying to you here. Russians against war). The term "pseudo-environment" was coined by journalist and author Walter Lippmann, winner of two Pulitzer Prizes, who, in his book Public Opinion, mentions the need to insert a so-called pseudo-environment between humans and the environment. Walter Lippmann's 1938 colloquium brought together 26 academics, economists and philosophers. Fifteen of the experts present later became members of the Montpellier Society, founded by the Austrian economist, theorist and political philosopher Friedrich Hayek. At one of the first meetings of that society, Hayek said: "Public opinion is the work of people like us who create the political situation in which politicians move."

Lippmann's reflections on the pseudo-environment and the statements of Vladislav Surkov, the Kremlin's grey eminence, intertwine with each other like strands of neoliberal DNA in the river of tears of the most used emoji icon of February 2022, showing the structural transformation of communication by the impact of digitalization, according to Lipmann, into a simplistic "yes/no".

Surkov, 2021: I am the author, or one of the authors, of the new Russian system… My portfolio at the Kremlin and in government has included ideology, media, political parties, religion, modernisation, innovation, foreign relations, and (he smiles) … modern art. You are not going to feed people with some highly intellectual discourse. Most people eat simple foods.
Everyone takes advantage of such people all over the world. Most people need their heads to be filled with thoughts. (2)

The diary excerpts are from two journals the artist kept during the years 2018 to 2019 and are reproduced with her permission. The excerpts from one journal include a message by the grandmother of the artist’s partner. The excerpts from the other cover the 27th to 32nd weeks of Ďurovec’s pregnancy. She marked her days off work in green, work days in orange, dreams in pink, and quotes, transcripts of interviews and other texts in red.

EVA ĎUROVEC studied Raumstrategien (“Spatial Strategies”) at the Kunsthochschule Weißensee in Berlin. Her work deals with living space and life fulfillment in the context of social, economic and ecological crises, issues of corporate power, corruption and their impacts on the landscape, people and animals. She creates objects combining autobiographical texts or diary entries with global and local themes. She lives and works in Berlin. 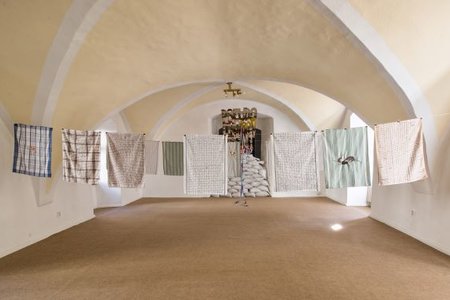 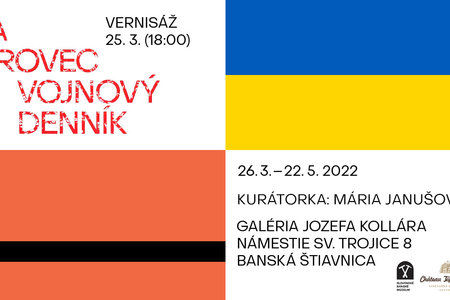 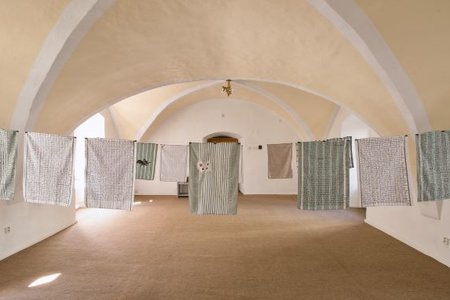 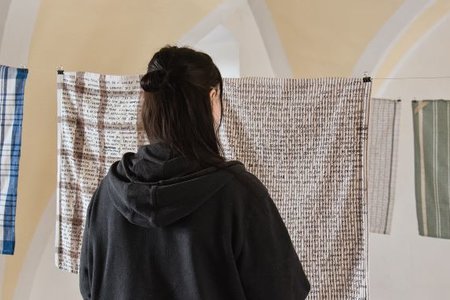 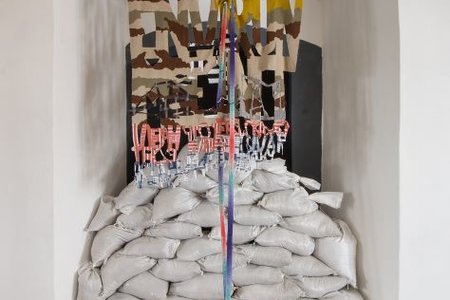 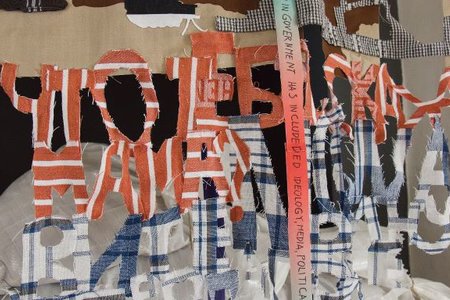 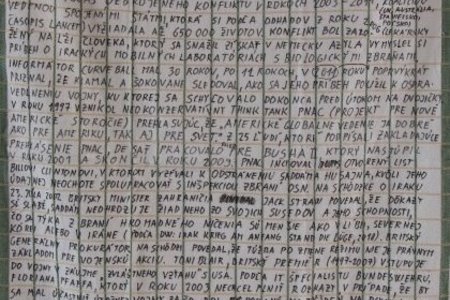 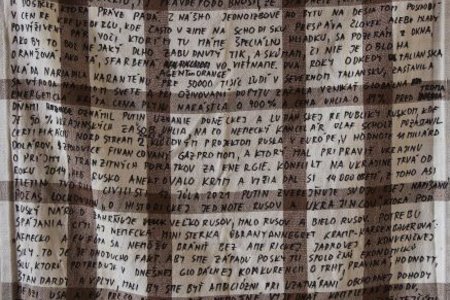 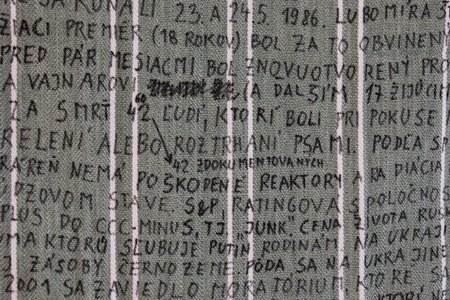 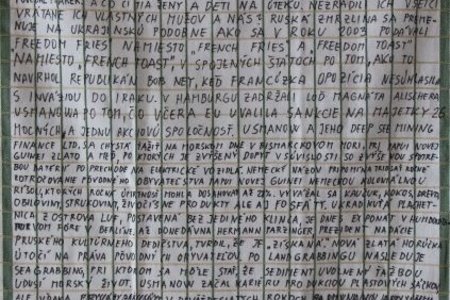 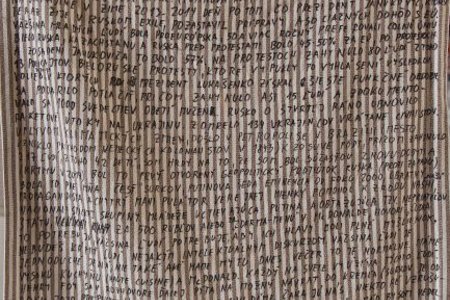 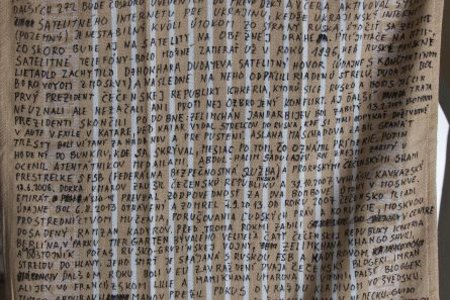 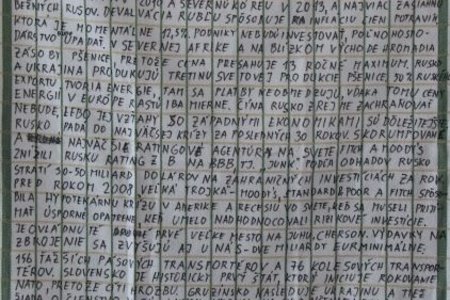